Do you know what ‘offal’ is? It’s garbage, throw-aways. But the brilliant of the world have taken offal and created delicacies – in liver pates and sweetbreads and chitlins. It’s a metaphor for the so-called crazy of the world who can find beauty and potential in things that the so-called ‘normal’ does not. So it goes with chitlins. Some without a soul might see chitlins only as a pig’s intestine, but anyone who suffered a heritage of slavery knows that a chitlin is a fine thing when it’s cleaned properly and cooked with love.

That’s Shauna Anderson’s latest business success – selling cleaned chitlins. She’s famous for chitlins, having sold them all over the world to entertainers and sports figures and the United States Congress. She’s even been inducted into the Smithsonian Institute Anacostia Museum and Center for African American History for her work. Shauna Anderson is a unique individual, considered a bit crazy by some and brilliant by others, she’s always made something out of nothing in her life. 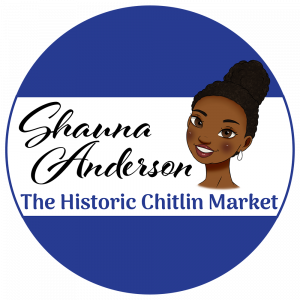 Authenticated as a treasure by

In April 2003, Chitlins were “authenticated as a treasure by the Smithsonian Institution” and thus, they asked The Chitlin Market to contribute to their exhibit on African American cuisine. The Chitlin Market turned over several of its documents and artifacts to be preserved. There was a ceremony at the City of Hyattsville municipal building party room and the room was filled with press and television cameras. Shauna Anderson was honored to have something of her creation being inducted into the Smithsonian. This was a very positive event honoring a Black woman, the first in the City of Hyattsville, MD, located in Prince Georges County. No one from the government was there to celebrate. 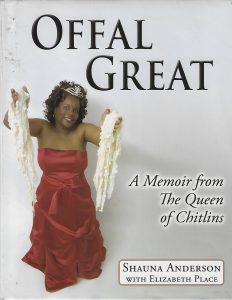